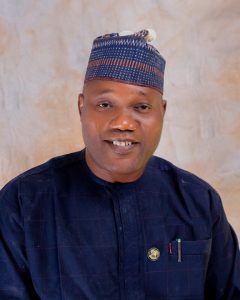 Born in Lagos into the renowned family of Alhaji Tijani Ayedero on the 6th day of October, 1967, the young and vibrant Hammed Idowu had his Primary education at Christ Apostolic Primary School, Moore Plantation, Odo-Ona, Ibadan, Oyo State from 1976 to 1982.

He thereafter proceeded to the prestigious Baptist Grammar School, Idi-Ishin, Ibadan also in Oyo State where he obtained his West African Secondary School Certificate (WASSC) in 1987. In his quest for knowledge, Hammed enrolled for a Sub-Professional Diploma in Business Administration at the Ladoke Akintola University of Technology, Ogbomosho.

Hammed IdowuTijani is an alumnus of Lagos State University (LASU), where he successfully graduated with a Bachelor of Science (B.SC) degree in Business Administration in 2010, he is also a fellow of Chartered Institute of Public Diplomacy and Management (CIPDM)

A man of many parts and a Rotarian par excellence, with service to humanity as his hallmark.

Rotarian Hammed IdowuTijani popularly referred to as “H.I.D” by his teeming supporters had undergone several trainings, courses and seminars both national and International, which has in no small way, broaden his leadership and managerial skills.

His public and political career started as a Dock Worker at the popular Apapa Port in Lagos, between 1989 and 1990. He later became the Personal Assistant (P.A) to the then Chairman of the Lagos State Ferry Service Corporation, Late. Hon Saliu Olaitan Mustafa. He equally served as the Personal Assistant (Political), to the then Lagos State Commissioner for Agriculture & Cooperatives, Late. Barr R.A Baruwa and Engr. Akinyemi Beckley, the then Chairman, Lagos State Electricity Board between 1991 and 1994.

The enormous experience garnered from these three political gurus, manifested with the election of H.I.D as the General Secretary of Ward LA, Agege Local Government under the platform of the then National Republican Convention (N.R.C) between 1990 and 1994.

As a resourceful businessman, astute politician and administrator, Hon. H.I.D Tijani is the Director of a number of Small and Medium Scale Enterprises (SMSEs). He remains the substantive Chief Executive Officer (CEO) of DANIHIT FOCUS VENTURES NIG LTD, an international agro business, importation and consultancy outfit.

A staunch loyalist and founding member of the All Progressives Congress (A.P.C) since inception, the 1.69metre, energetic team player, is a recipient of numerous Merit Awards which includes; BEST EKO LOCAL GOVERNMENT SUPERVISORS MERIT AWARD in 2006, the “Award of Excellence” by the Business Administration Department of the Lagos State University (LASU) in 2009, the “CDC Merit Award 2014, award of excellence on best chairman on provision of infrastructure, Environmental friendly chairmans award, just to mention a few

The Rotary President presented an Award TO HID