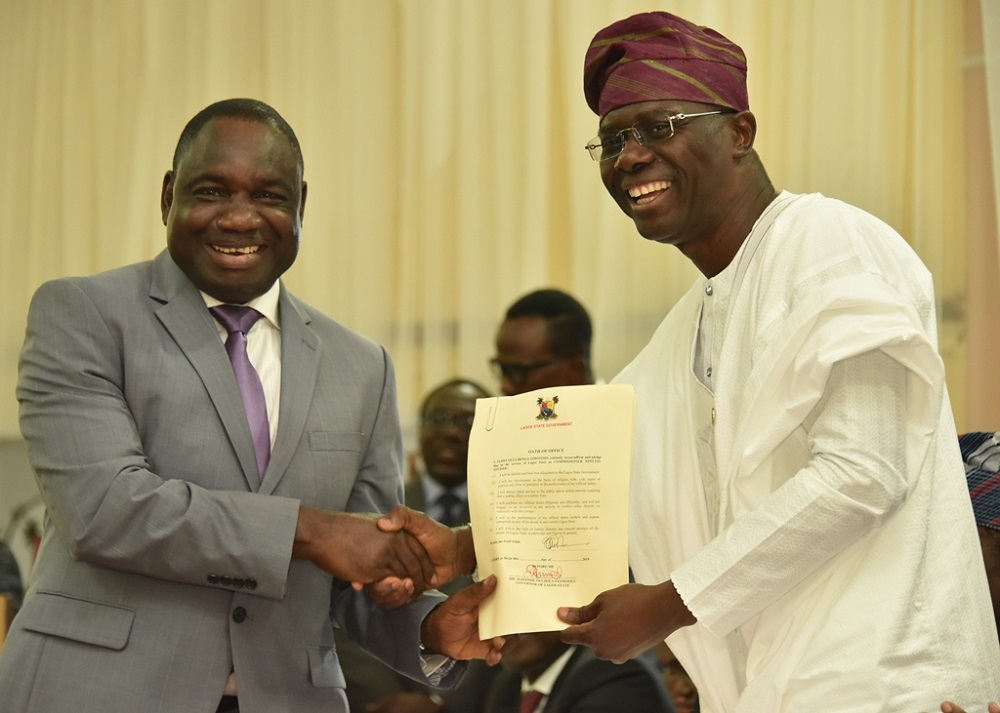 The Lagos State Commissioner of Information and Strategy, Mr. Gbenga Omotoso has charged Public Affairs Officers to promote the T.H.E.M.E.S vision of the present administration to its various publics and stakeholders, saying the Information Ministry has a vital role in making the programmes of government explicit and clear to the populace.

Speaking during his maiden meeting with the management staff of the Ministry in Alausa, Omotoso emphasized the importance of teamwork in achieving set goals and sought the support of management and staff in taking the information machinery of the State government to a higher level.

While expressing confidence in the ability of the staffers to perform the task ahead, the Commissioner said, “From what I have seen and my little interaction with people here, I know that there is nothing that we set out to achieve here, that we cannot achieve if we work as a team.”

He promised to maintain an open-door policy during his tenure of office and encourage the staff to reciprocate the gesture by coming up with suggestions and ideas that will advance the performance of the Ministry and boost public acceptance of government initiatives.

In his opening address, the outgoing Permanent Secretary, Mr. Fola Adeyemi, who retires from the Civil Service in September, extolled the virtues of Mr. Omotoso, saying the staffers would immensely benefit from his experience as “a multiple award-winning journalist and a professional of repute that can stand tall among his peers in the industry.”

He expressed confidence that the newly appointed Commissioner would get the required support of management and staff in meeting the huge expectations of the government to expand the frontiers of information dissemination to Lagos residents and Nigerians in the diaspora.

Adeyemi affirmed that the Ministry had the framework and tools to deploy government information across media channels, noting however that an upgrade of the existing machinery is necessary to meet the requirements of the Smart City goals.

Also speaking at the interactive meeting, the incoming Permanent Secretary, Mrs. Omobolanle Ogunmola, recounted the expectations of government as outlined during the recent retreat Governor Babajide Sanwo-Olu held with Cabinet members, Permanent Secretaries and Heads of Agencies themed “Delivering the Lagos of Our Dream”.

Ogunmola stated that the forum emphasized the importance of teamwork and positive attitude towards the public as a vital tool for achieving set objectives and projecting a positive image for the government of Lagos State.

She also expressed willingness to share new ideas and experience with the staff of the Ministry following her recent deployment to the Ministry, promising to maintain an open-door policy that will breed harmony amongst staff at all levels.

HID JOINS THE LEAGUE OF INTERNATIONAL INTEGRITY HALL OF FAME