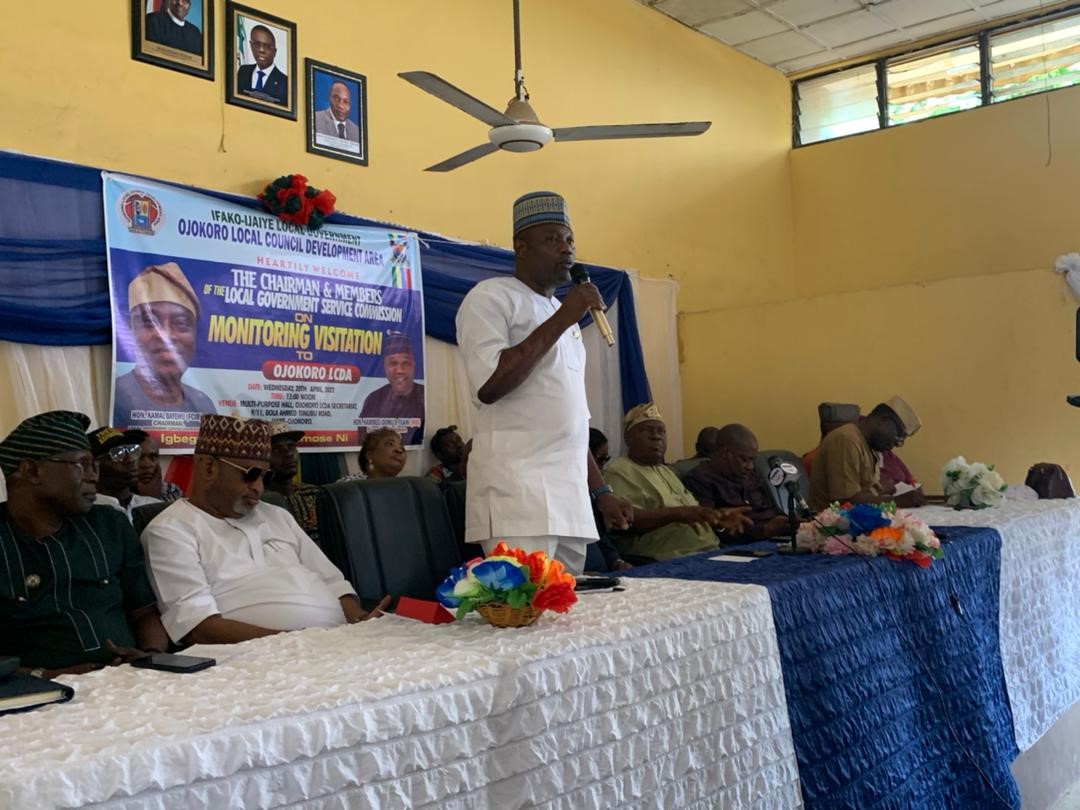 Hon. Bayewu gave the commendation at a meeting with the Council’s members of staff during members of the Commission’s monitoring visit to the Council’s secretariat at Ijaiye-Ojokoro on Wednesday, April 20. 2022.

According to the Commission Chairman, Hon. Tijani has been giving welfare of the Council’s workforce priority by his administration, while utility vehicles were also provided to boost internally generated revenue in the Council.

He also praised the Council’s Management, particularly the Council Manager, Mr. Adeyemi Adebola for being professional in the discharge of his duties, as he has brought innovative ideas to his administration and visible renovations to the Council.

He further disclosed that the annual visit, which is one of the statutory functions of the Commission, is meant to monitor the administration of the 20 Local Government Councils and 37 Local Council Development Areas in Lagos State, as well as to ensure that workers’ welfare is not compromised.

Earlier in his welcome address to the Local Government Service Commissioning visiting team, the Council boss, Hon. Hammed Tijani, attributed his administration’s success so far to the cooperation and support of all workers of the Council, describing them as disciplined, dedicated and highly committed technocrats.

He promised that his administration would continue to provide enabling environment and necessary motivation for the workers to enhance better service delivery to members of the public.

In his own remarks during the visit, the Permanent Secretary, Recruitment, Promotion and Staff Matters in the Commission, Mr. Biodun Bamigboye advised the workers to always be punctual and show more commitment to their duties, as no form of indiscipline will be tolerated by the Commission.

Also, the Permanent Secretary, Establishment and Training in the Commission, Mrs. Kikelomo Bolarinwa stated that top level staff training has begun at the Commission, thus, the Council’s workers should take advantage of the opportunity to improve on their career, particularly in the area of Information and Communication Technology (ICT).

In his vote of thanks, the Council Manager, Mr. Adeyemi Adebola, appreciated the Commission Chairman and his team for the visit, as he promised that every member of the Council’s staff would always endeavor to put their best in the service to members of the public, order to compliment government’s efforts at bringing meaningful development to the grassroots.

All cadres of the Council’s workers were present during the visit as it affords them the opportunity to ask questions and make comments on issues concerning their welfare and career.